Grow Your Own: Luffa Sponges 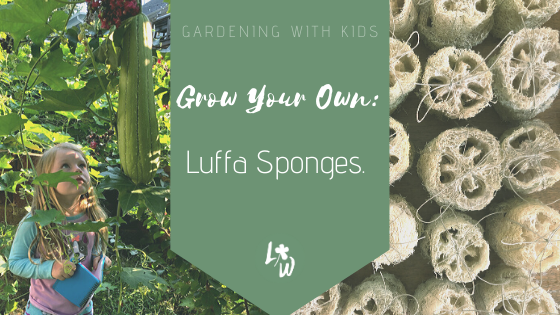 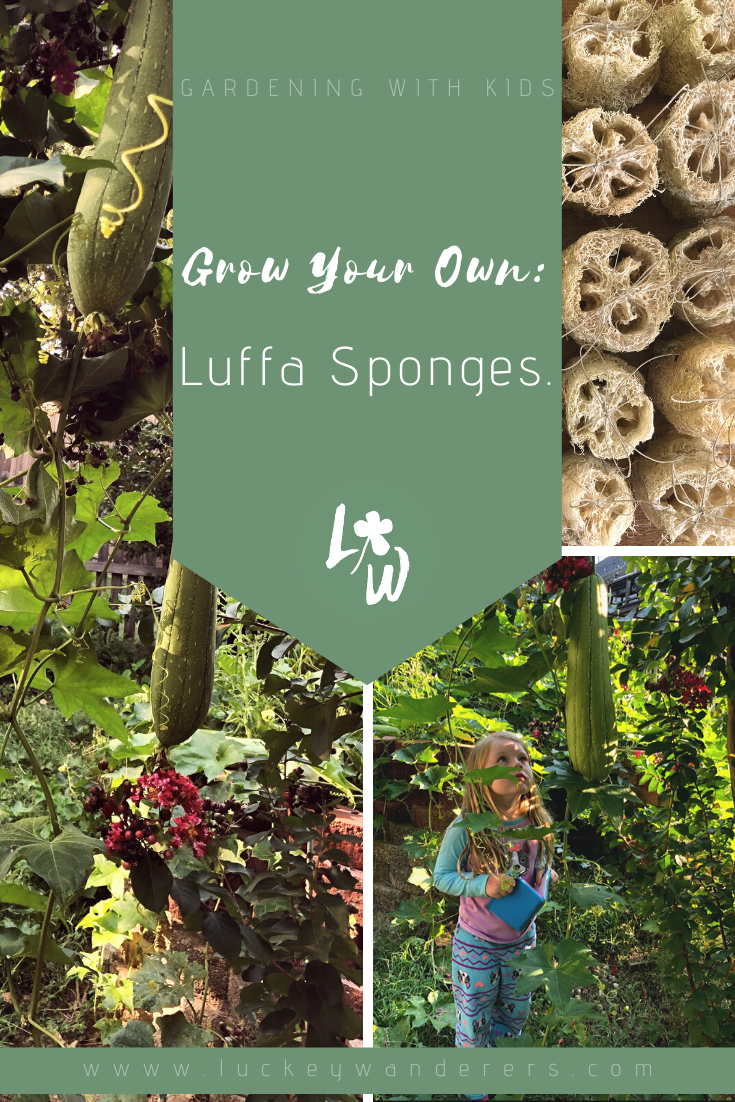 Last year, about this time, I stumbled on an article about luffa (or loofah) sponges. I was absolutely flabbergasted to learn that they could be grown from a cucumber like vine! After a bit more research I realized that our growing season and climate would be a good fit for luffas. We had just completed our new keyhole garden and I was itching to get it filled with plants.

There are several resources to order seeds, but luckily I stumbled on some plants ready for transplant at our local Master Gardener plant sale. You can look up your local chapter of Master Gardeners to find out when sales are happening. Though, in cooler climates and zones farther north it may be hard to find luffa plants.

You can also order seeds HERE or HERE.

Luffa plants (or loofahs) are related to the cucumber family. They are subtropical vines that are often cultivated as food in the Eastern hemisphere and harvested when the fruit is young and tender. As it ripens, it develops the fibrous interior that becomes the loofah sponge. When allowed to dry, the exterior is able to be peeled off, the seeds harvested, and the fibers used as the luffa sponges. They are commonly used in bathing or cleaning. 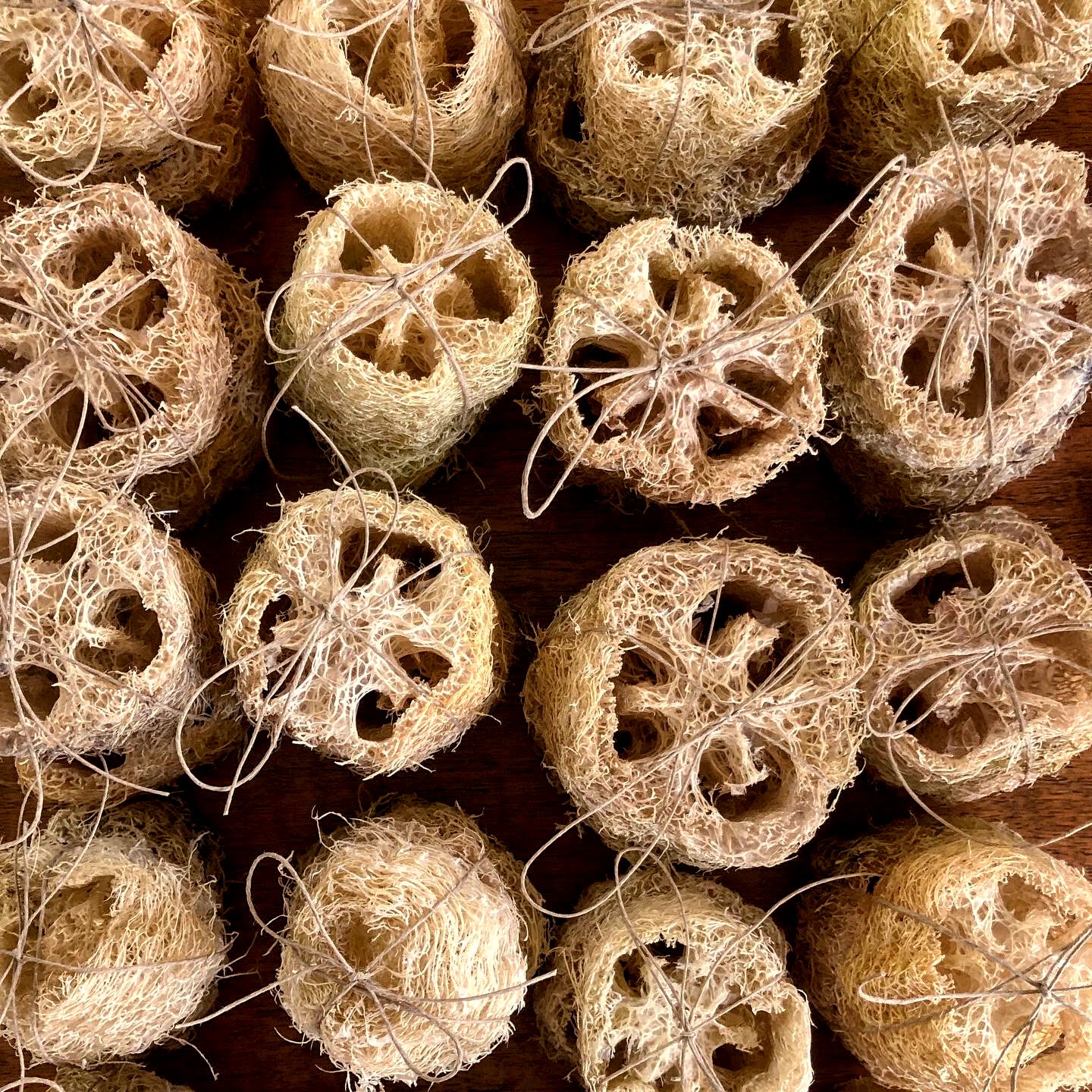 The monster takes over.

As the summer warmed up, our garden began to explode. Soon the two luffa plants I had put in our keyhole garden took over. Throughout the summer we lovingly referred to the massive vines as “the monster.” We would jokingly warn about not standing too still in the garden or the vines would soon consume you.

When I planted the luffas, I hadn’t realized that the vines can often get up to thirty feet long. Our garden didn’t have the space to deal with the vines and eventually they were laying across the grass, growing in the nearby bush, and taking over our Crepe Myrtle tree.

What I also soon learned was that growing these luffas would be an exercise in trust and patience. The summer wore on and the garden thrived. Tomatoes, peppers, sunflowers, peas, cucumbers all began bearing fruit and blooms. Still, nothing but massive vines on the luffas. Not a hint of a bloom began to show until well into the fall. All summer we dealt with the massive tangle of vines and leaves. There is a lesson there about parenting and patience. But perhaps not just limited to parenting. Growth looks different for everyone and the fruit will come when it’s ready. 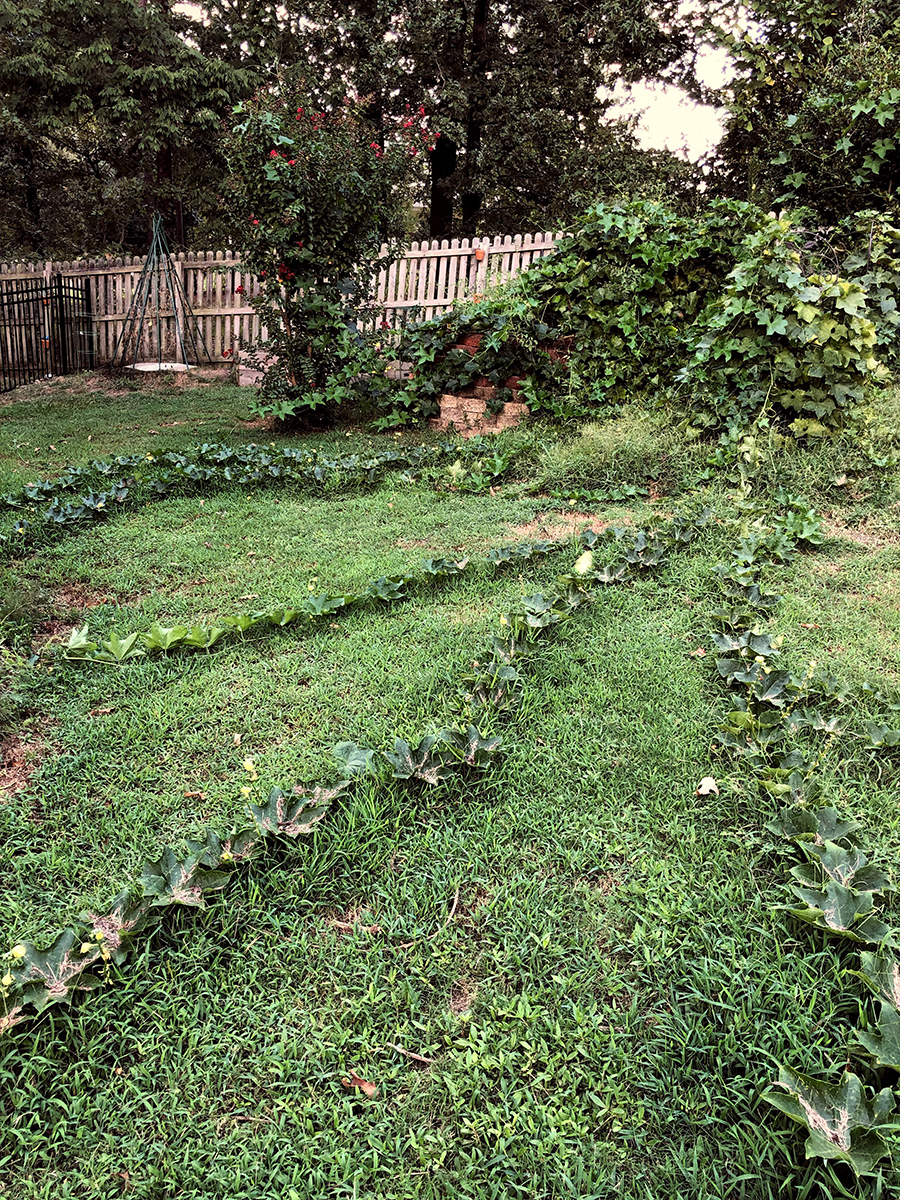 The late summer arrived, inching it’s way toward fall and we finally had some blooms! Each morning my kids would join me to check on the vines and we would delight in seeing the beautiful yellow blooms sticking straight up, reaching for the morning sun. As we walked along the vines we could hear buzzing from all of the happy bees working their way from flower to flower.

Then, one morning a scream disrupted the buzzing and my daughter said she found a fruit! No larger then my index finger, but at last! Something! As October wore on, the growth of the fruit was nearly exponential. There were gourds hanging from the crepe myrtle, hanging from the bush nearby, and buried in the grass. Each day we tried to find them all, gently turning the ones in the grass so they wouldn’t mold.

The garden (no matter what you grow) provides a great way to nature journal throughout the summer. My daughter especially loved her daily drawing of the luffas as they grew, eventually getting over twelve inches long! 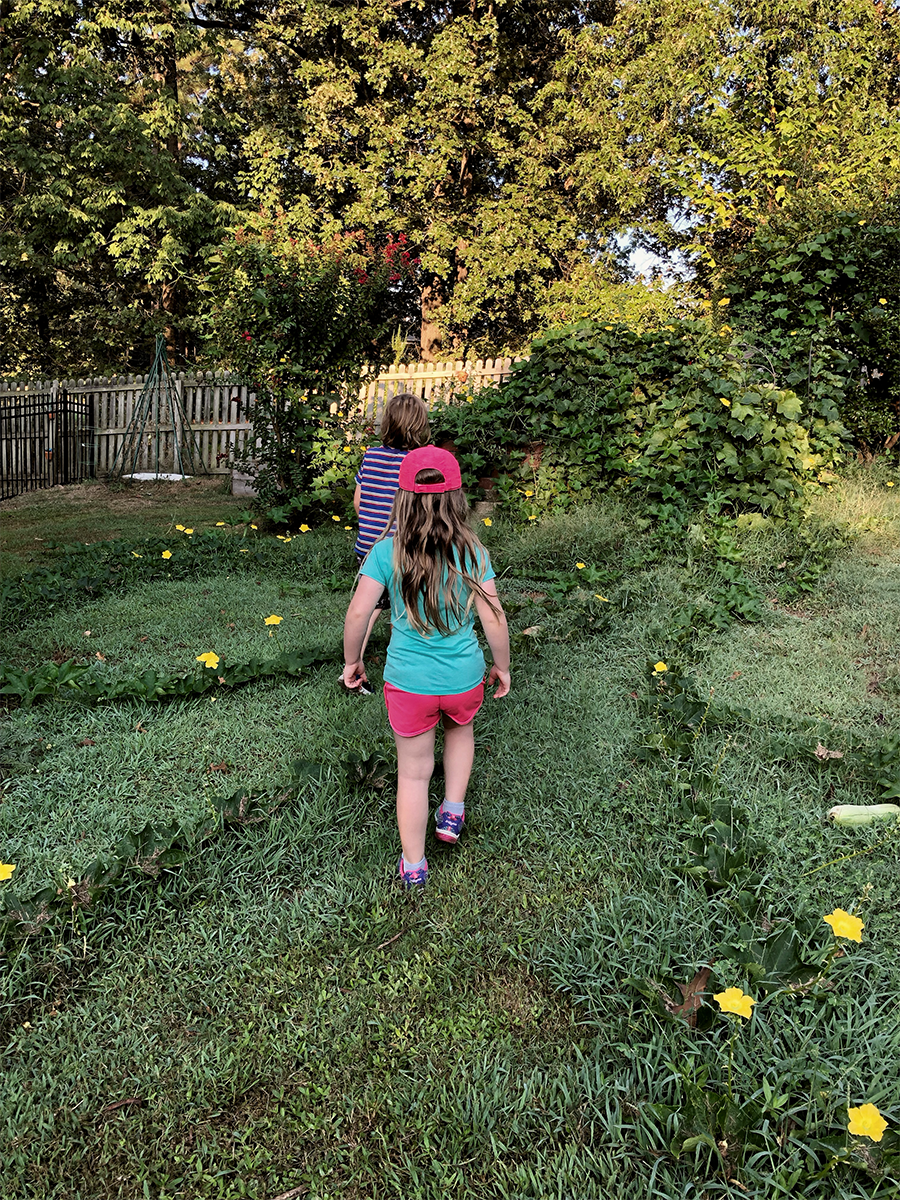 By the beginning of November, everything in the garden had died off, except the luffa vines. Ideally, they should be left to dry on the vines. However, we were ready to clean up the garden for the winter and needed to be able to care for the grass under the vines. So, we tore them out. My children helped me snip the luffas from the vines and we stacked them on an improvised drying rack on our back deck. The stacking worked well, but, I do think it took longer for the luffas to dry out. If you’re able to do so, leave the on the vine until the exterior turns brown and the feel lighter. You may even hear the seeds rattle around inside once it has thoroughly dried out. 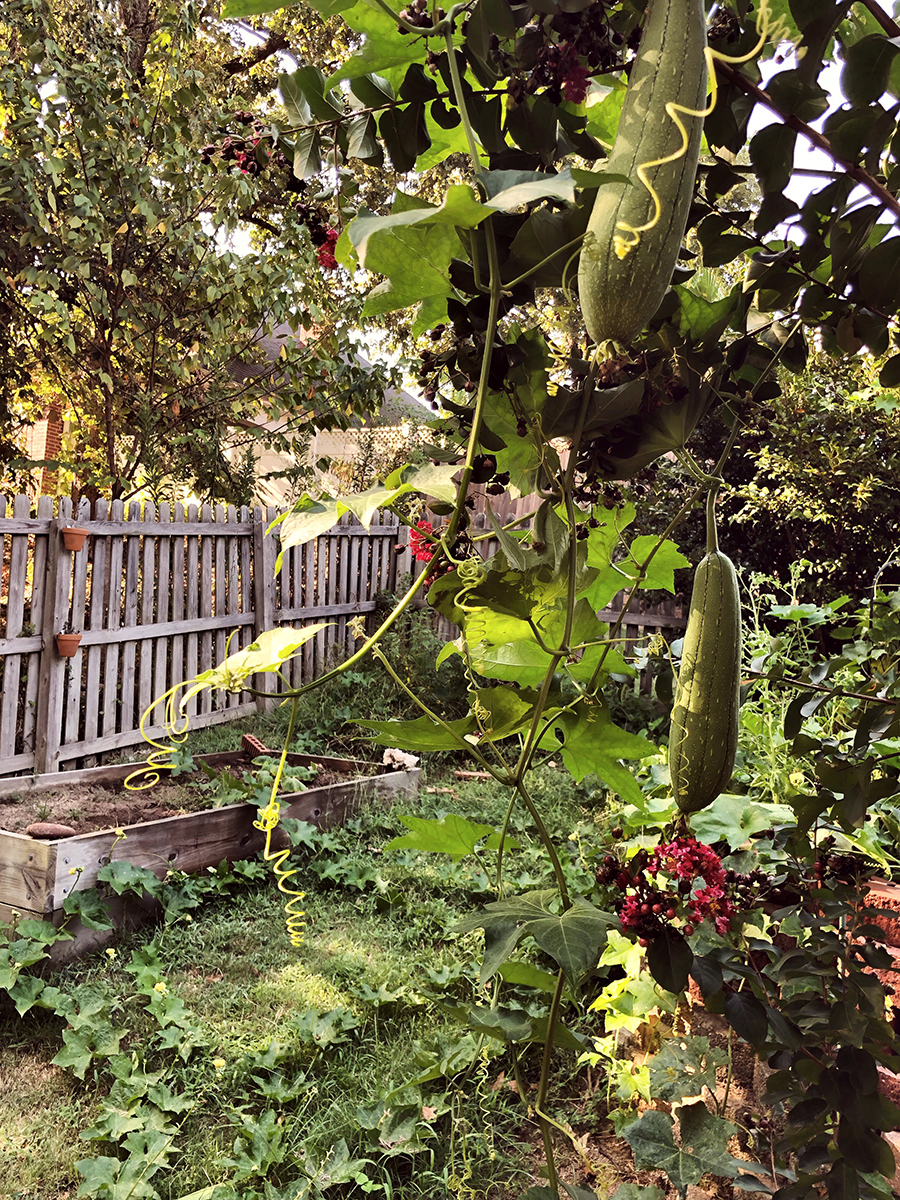 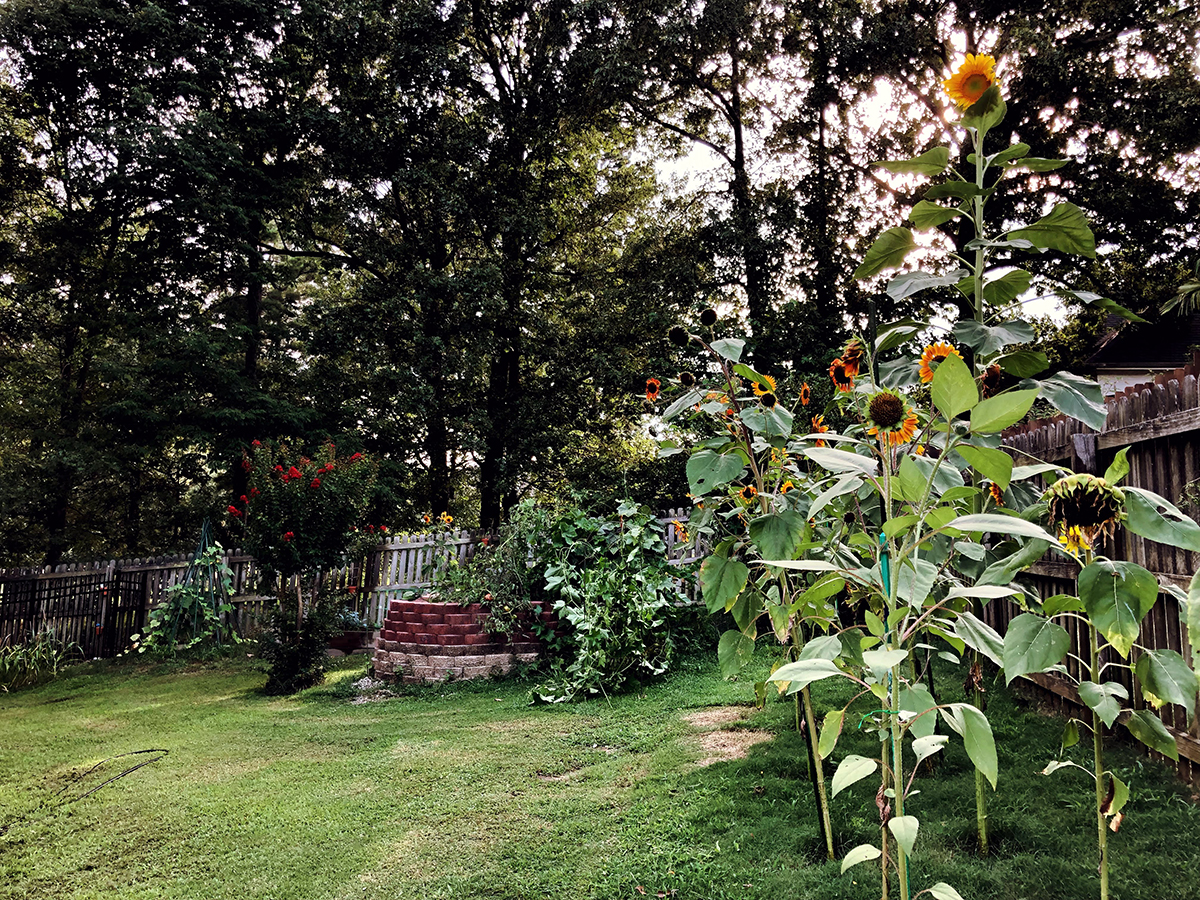 What do we do with all of these?

Truthfully, I had no plans for all of these luffas when I planted them. Mostly I just thought it would be a fun experiment. Well, my entrepreneur children thought up the plan to sell some at our local farmer’s market. This year there was a special market for the holidays and the luffas would be perfect. I also decided to hold some back for Christmas gifts . So, dear family members, please act surprised when you get luffas for Christmas.

My kids helped me peel the luffas that were dried. Removing the seeds became quite the fun game as the best way to loosen them is to bang them like mad against the sides of a trash can. We saved enough seeds to start this process again in the spring but the rest we got rid of. Then once the luffas were peeled and de-seeded , I sliced them in two inch segments. We decided on a price point of $5 for a bundle of two and got to work tying the bundles with twine. 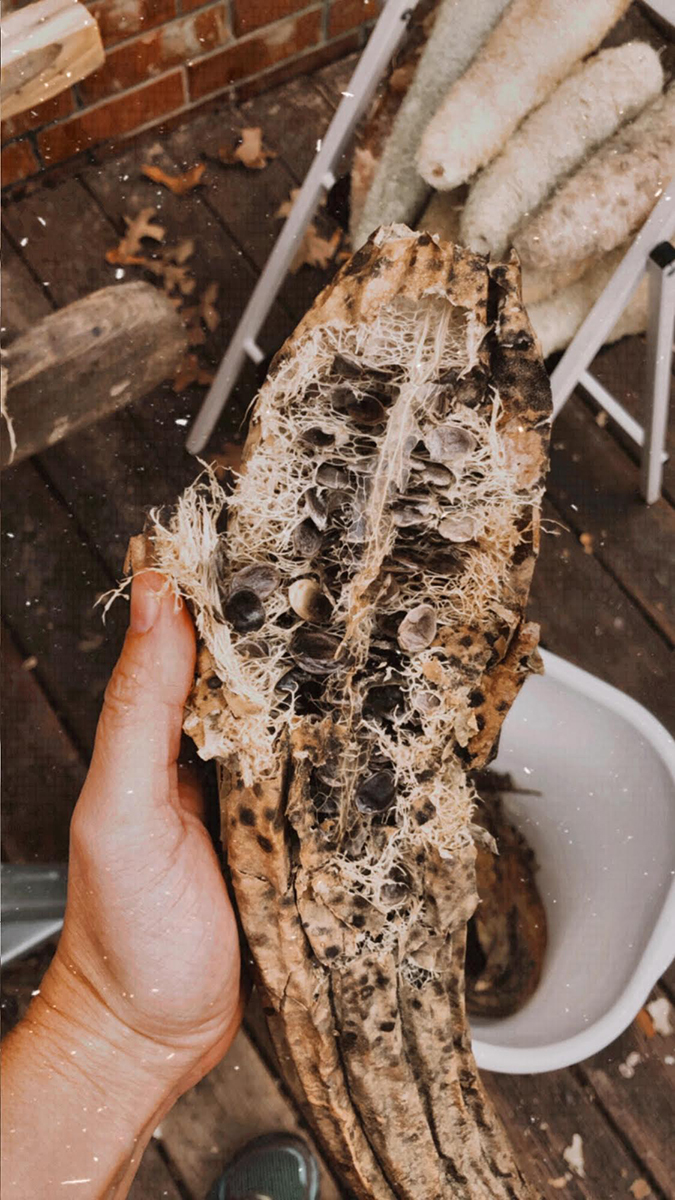 The day of the market arrive and my kids were buzzing with excitement all day leading up to it. We arrived early to the set up and picked a spot next to our favorite vegan food vendor. They set up the table with twinkle lights and luffa sponges. The market began and they both answered everyone’s questions about what they were selling and where they came from. At one point, my daughter was halfway across the market asking everyone if they wanted to feel a sample, then directing them back to our booth if they wanted to buy some. I was so proud of both of them. And it was the perfect way to end our luffa experiment. Plus, the $35 each my kids got to put in their piggy banks wasn’t too bad either. 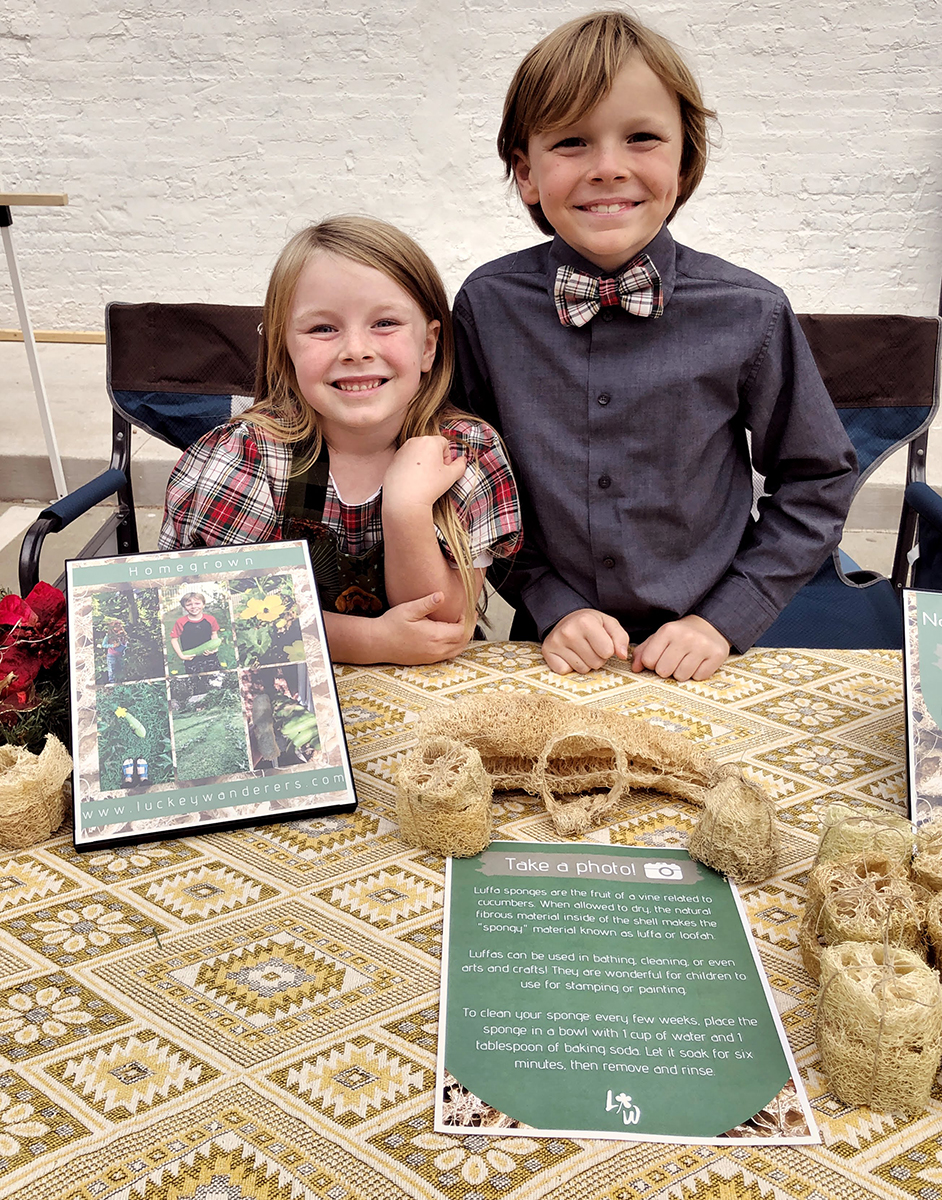 If you want to grow your own luffas.

A few things to keep in mind if you would like to try this in your own garden: 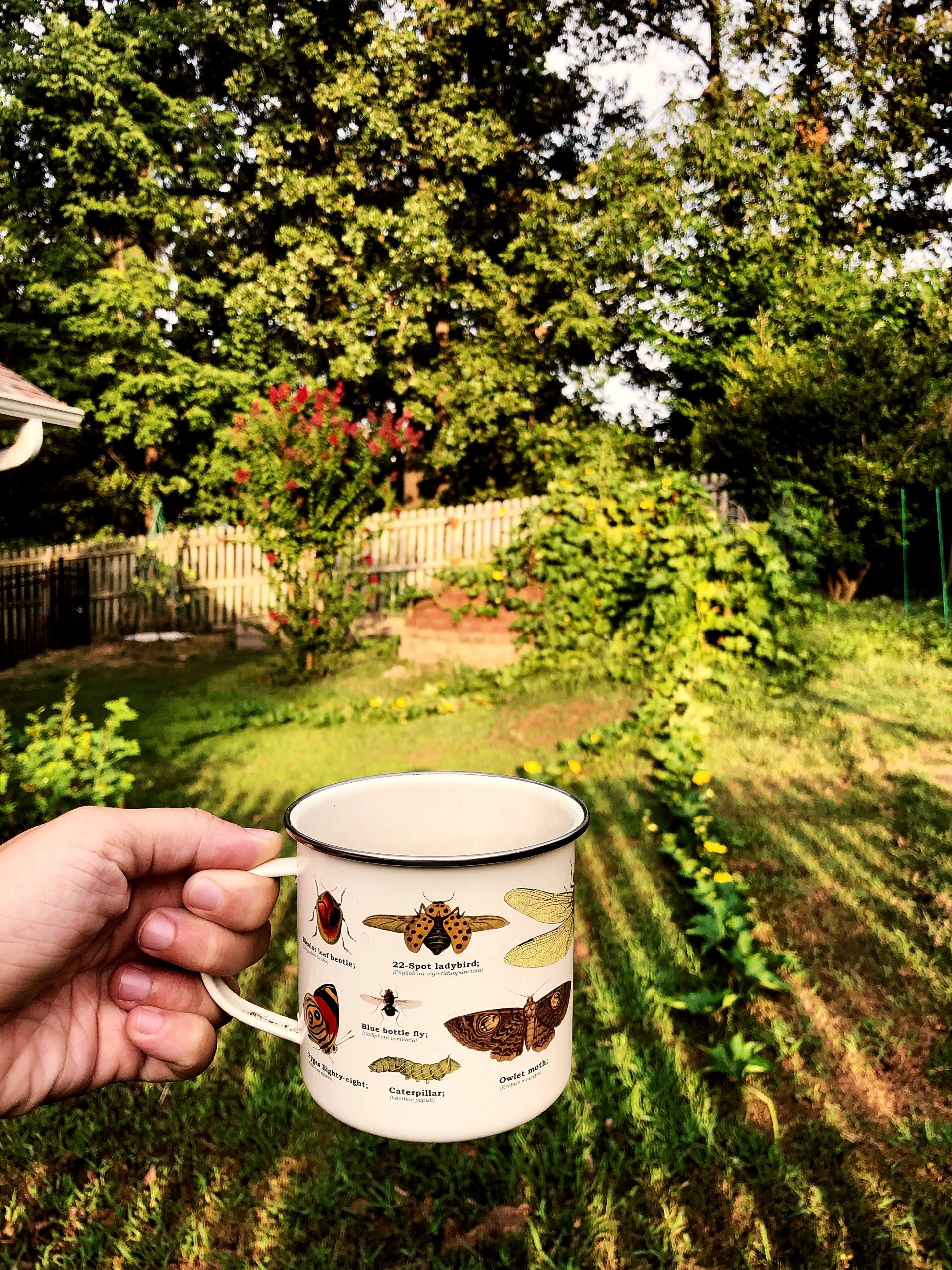 Do you have a garden?

Gardening with my kids has been one of the most rewarding hobbies we have pursued. Not only does it nourish our bodies but also our hearts. The process is incredibly rewarding and the byproduct is a lesson in patience and resiliance.

What’s your favorite thing to grow? I’d love to hear about it!

One of our favorites is sunflowers! We had the most amazing success with sunflowers this past year and turned them into a fun hands on learning experiment. You can read more about that HERE. 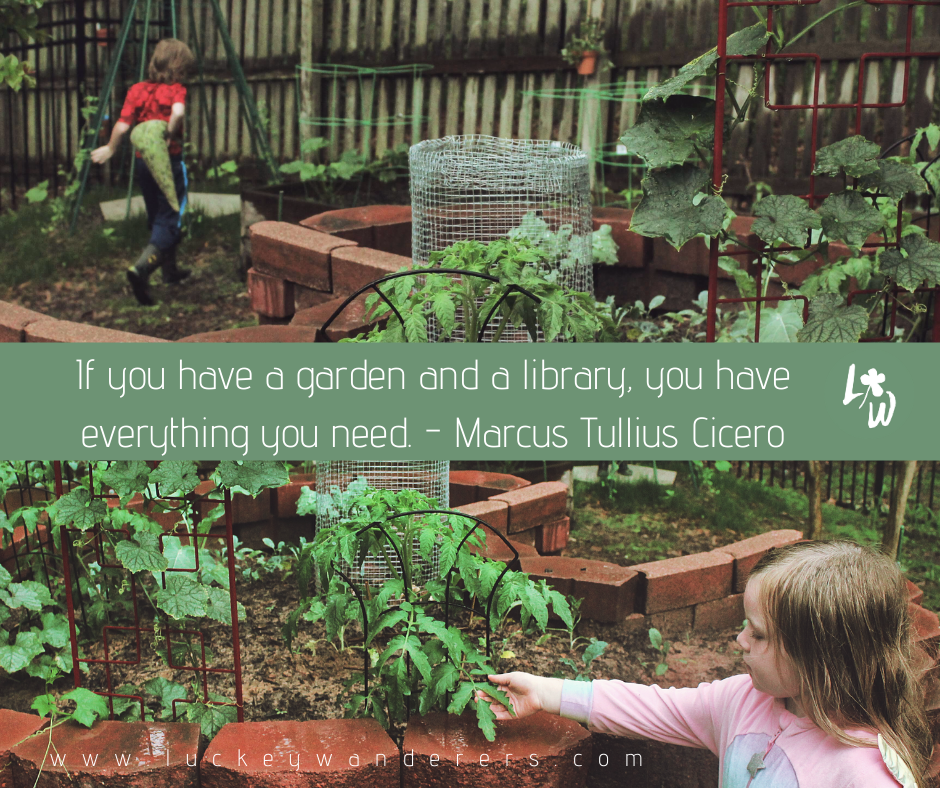 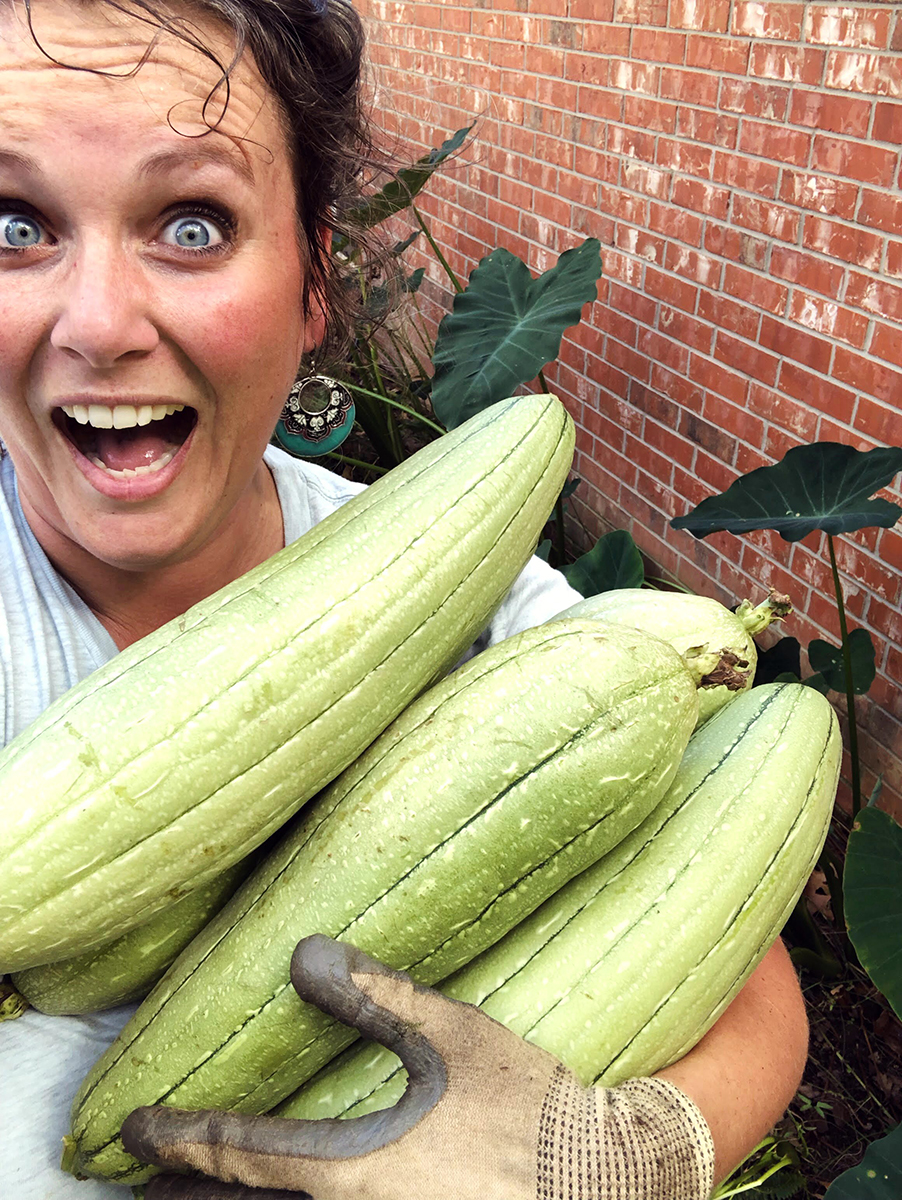 Thanks for reading all about our experiment with growing luffa sponges! I'm not sure if we will do it again, but I'd love to hear about your experienc eif you give it a try! 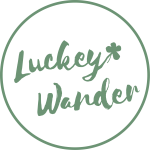